The Tri-Cities Chamber of Commerce is pleased to announce that the Mobile Business Licence has been approved in the Tri-Cities.  Now, mobile businesses are able to operate in more than one municipality by purchasing one licence, rather than obtaining licences in each municipality.  This cuts down on redtape, letting businesses focus on doing business and not on paperwork.

In a press conference held at Canstar Restorations on December 12, Minster of State for Small Business Naomi Yamamoto announced the adoption of the bylaw allowing businesses to purchase a Mobile Business Licence (MBL), otherwise known as a Inter-Municipal Business Licence, in the Tri-Cities.  Coquitlam Mayor Richard Stewart, Port Coquitlam Mayor Greg Moore, Port Moody Mayor Mike Clay and Chamber of Commerce Chair Davide Fantillo all expressed their satisfaction with the way the three communities, staff, councillors and the Chamber of Commerce worked together to bring this proposal to fruition.

Special thanks goes to city councillors Craig Hodge of Coquitlam, Mike Forrest of Port Coquitlam and Diana Dilworth of Port Moody for their hard work on this project.

The Mobile Business Licence is an important step in making business operations easier in the Tri-Cities.  In order to extend this pilot project beyond its one-year timeline, we encourage all appropriate business to take advantage of the MBL and contact their local city hall for more information. 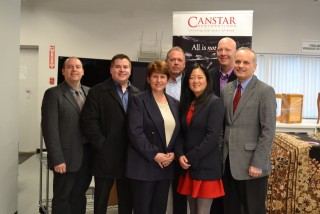